Before consuming red bull the first question arises and it is an excellent question that for how long does red bull last in your body.

In this growing faster and modern world people need energy to concentrate on their work in their daily life, as most of the people take the red bull to wake up and energies their body to get active in the morning. 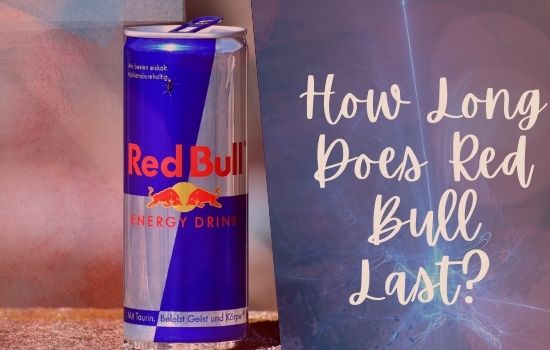 Actually, no one can say how long does Red Bull last, usually, it depends on the different person considering different factors and specifications of a person’s body.

How Long does Red Bull last –

But normally it last at most between one to five hours of one can of Red Bull and around one to two hour a person can stay active, but taking red bull every day will reduce the effect on a person’s body as also it contains caffeine which is not good for the health for continuous day or for a long drive of life.

Usually, if you ask someone who is taking a red bull on a continuous basis would have experienced different types of side effects on their body.

What happens when you drink a Red Bull – Effects of Red Bull on your body? 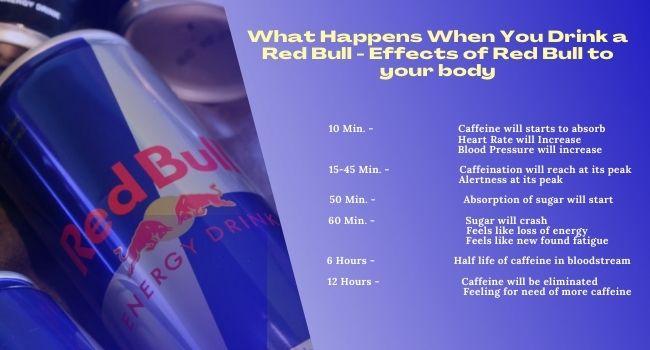 After the consumption of Red Bull, in the first 10 minutes, the effects which fall on your body is, the caffeine starts absorbing into your body with the enhancement in the heart rate and also cause an increase in blood the pressure of the body.

So how long does red bull last in your body after drinking it?

Red bull comes in various flavours at different prices in the stores. As I said different factors are considered that how much it last like:

How much time does your body take for absorption, is the person taking red bull on a continuous basis or at how many intervals, also it depends on the age, weight and size of a person and many more factors.

Are Energy Drinks Bad For You? –

Energy drinks promise the ability to revitalize your mind and body, increase your energy and sharpen your focus, but are they really safe?

For one thing, energy drinks are typically loaded with added sugar, delivering as much if not more than what you’d find in a soda, and those extra energies – boosting ingredients sound better for you than they are.

For most of these extras, like B vitamins, ginseng, green tea extract, ginkgo Biloba, guarana, there’s not much research to show they actually deliver on their promises. The real pick- me- up in an energy drink is caffeine. Some energy drinks deliver more caffeine than two cups of coffee.

Check the serving size on you can or bottle, and be aware that there may be more caffeine than what’s listed since only pure caffeine has to be counted. That does not include coffee, tea or other naturally caffeine-containing ingredients. The bottom line is that energy drinks can be fairly safe in moderation.

Drinking too much, however, may cause adverse reactions like heart palpitations, chest pain or even seizures. For safer, more natural pick- me- ups, try coffee or tea.

Apparently caffeinated drinks like 5 Hour energy are available everywhere you go. Even though caffeine has been thought to keep you alert and awake.

The energy shots of five hours include quite a very large sum of caffeine. As if any other caffeine products, all these drinks might make you feel dizzy, jittery and nervous. Commonly the side effects of energy drinks include an increase in blood pressure, a few headaches, fast heartbeats and difficulty in sleeping.

In addition, these shots contain the vitamin niacin which might cause some people to experience flushing (hot feeling, redness on the skin).

The rise in blood flow near the skin can be the cause. Deaths which are reported are minimum in number which are related to energy drinks, the majority are from incompatible use and excess consumption.

The FDA ongoing to enquire reports of injury, illness or death of people who consumed products marketed as energy drinks. A number of products that includes alcohol and caffeine have been removed over the years due to safety reasons.

In addition consumption of a large number of energy drinks or any drinks for a long period of time can be extremely harmful, as it contains the high amount of sugar which is not appropriate for your body.

Are Energy Drinks Really that Bad? – How long does red bull last

We come to listen all the time that, they are really bad for us, especially for teens, but anyway we all consume it. So are energy drinks really that bad?

First, let’s rewind back to 1997, the year Titanic came out in theatres, and I looked like this. In addition, the first energy drink red bull which is available in the stores in the United State. Since then, energy drinks like Red Bull have skyrocketed in popularity.

But things started getting intense in 2011, when the American Academy of Paediatrics, an organization of over 60,000 paediatricians, recommended that kids and teens should never drink energy drinks.

The reason behind why they were so worried? Caffeine! They were also worried about student-athletes who were complicating energy drinks for sports drinks.

As we cannot say how long does red bull last in your body and lastly, in my opinion, I would recommend the old age people to take advice from your doctor before taking such drinks who are already suffering from high blood pressure or such diseases which can worsen after taking such energy drinks.

I hope this article helps you to take measures for your health-related decisions.